To see the sheet music for this arrangement, click here. 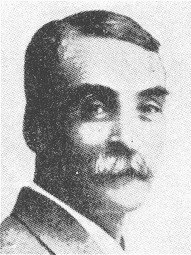 Charles Hutchinson Gabriel is one of the most prolific names in American church music for the 20th Century. He wrote some 8,000 songs, many of which are still included in modern hymnals.

He was born August 18, 1856 in Wilton, Iowa into a singing family. The Gabriel farmhouse was often the site of neighbors coming by to sing hymns together, led by Charles’ father, Isaac. The elder Mr. Gabriel taught singing schools and bought the family a reed organ, which Charles taught himself to play. In his autobiography Sixty Years of Gospel Song, Charles reflected on those early years: “In my home we were trained so thoroughly on the Hallelujah Chorus, for instance, that we sang it from memory. Choruses from Creation, Elijah, and other oratorios were included in our repertoire.” His only music education was what he received at the feet of his father. Charles was sixteen years old when his father died (1873), leaving behind a wife, eight children, and several appointments to teach singing schools. Charles took up his father’s schedule and began traveling and teaching, first keeping his father’s teaching dates and then – as his reputation grew – he made his own appointments as he traveled the country. In that same year, he published his first song.

After much travel, Gabriel returned to Wilton and – according to the Des Moines Register – became the town’s “leading musician, writing marches, polkas and leading the town’s band. Gabriel played the piano, cornet and violin, was a fine singer and excelled at arranging music.”

In 1890 Gabriel moved to San Francisco, California and began working with the Grace Methodist Episcopal Church as music director. It was there that he wrote Send the Light, which was first published in E.O. Excell’s Scripture Songs (1891). Send the Light was Gabriel’s first commercially successful song. Two years later he moved back to the Midwest and began work with the publishing side of religious music, anchored in Chicago.

From 1895-1912 he worked with Excell’s famous publishing house; then he moved to the Homer A. Rodeheaver Company of Winona Lake, Indiana. In addition to his publishing company, Rodeheaver was the song leader and music director for evangelist Billy Sunday. This union between Gabriel and Rodeheaver ensured that Sunday’s rival meetings would prominently feature Gabriel’s best work, cementing his reputation as a songwriter. On one occasion Washington, Iowa celebrated the chorister’s presence with “Charles Gabriel Day.” Reportedly, huge crowds turned out for the event.

He stayed active with Rodeheaver & Company until his death on September 14, 1932 in Los Angeles, at the home of his son, Charles Jr.

All in all, he edited some 95 hymnbooks during his carrier (although I have not seen this particular book, it is said that he edited The New Christian Hymnbook (1917), along with T.B. Larimore, for the Gospel Advocate Company of Nashville, a publishing house associated with churches of Christ.). These many works include: forty-three song books, seven men’s chorus books, nineteen anthem collections, and twenty-three cantatas. As stated earlier, Gabriel wrote around 8,000 songs. Supposedly, in order to keep buyers from thinking their products were collections of just Charles Gabriel songs, his publishers had him to publish many of his works under pseudonym. His aliases include Charlotte G. Homer, H.A. Henry, and S.B. Jackson.

His personal life included two marriages, with one child born to each. He first married Fannie Woodhouse in 1876 in Iowa. To this marriage was born a daughter, Vera. This marriage ended in divorce. His second marriage, to Amelia Moore, lasted from 1889 to her death in 1931. Charles, Jr., was born in 1892.

Send the Light is one of the great missionary hymns of the church. In 1890 missionaries’ tales of reaching the foreign masses thrilled the imaginations of stateside Christians.

Verse 1 sets the stage of adventure and distance, the call that comes ringing over the restless waves of the sea, beckoning the would-be missionary to traverse the wild sea and bring peace to the restless lives of those who call for help. The missionary would go and – in the words of Romans 10:14f – preach to them: “But how are they to call on him in whom they have not believed? And how are they to believe in him of whom they have never heard? And how are they to hear without someone preaching? And how are they to preach unless they are sent?” The missionary would go! Send him! Send the light-bearing messenger! Not only are there souls to rescue and save, they are calling for the gospel. The hearer is a given, the teacher is a given – the only thing lacking is the sender.

As Gerald Paden, great missionary and trainer of missionaries, is known to say: Some give by going, some go by giving – without both, no mission work is done. We are partners with our missionaries whom we support! This song pleads with Christians who have the means to send a man with a mission, a true missionary, over the restless waves to bring the light.

Verse 2 echoes the story of Acts 16:6-10, “The Macedonian Call.” There is very little that can tug at the heartstrings of a godly person more than a plea for help. Although Paul had other plans in mind, the image of the Macedonian man urging him, “Come over the Macedonia and help us,” convinced him that he would serve God in that context. In the same way, there are missionary points today from which the native people have called, “Help us, too!” When we hear them, do we jump into action like Paul did? Do their cries fall on deaf ears?

The “golden offering” which is pictured at the foot of the cross is from each of us and answers the proceeding questions. We would lay down our very best and dearest at the feet of a crucified Savior? “Yes!” we answer in song.

Verse 3 emphasizes that it is grace which must be spread. In days past well-meaning missionaries have not only imprinted the story of Jesus upon native cultures, but they have also taken Western culture to foreign peoples. Jesus is cross cultural! Grace is not only given to Americans and American-style churches. In many ways, Christians of other lands would be good not to copy what they see in us. It would be to their advantage that they look ever to the Bible and New Testament congregations for an example of how to best serve Christ in their own local context. Does this not echo the words of Jesus as he chastised the Pharisees missionary methods? “Woe to you, teachers of the law and Pharisees, you hypocrites! You travel over land and sea to win a single convert, and when he becomes one, you make him twice as much a son of hell as you are” (Matthew 23:15). Why this condemnation? Because their message was something other than grace – they taught of a God who tied burdens on men (cf. Luke 11:46); Jesus represents a God who frees men. Grace produces thankfulness which, in turn, generates Christlikeness within the Christian. Truly knowing what God has done for us can lead only to becoming more like Jesus each day.

Whether we send or we are sent, verse 4 speaks to the hard work we are in for. Having grown up in a missionary family, I can attest to the rigors of living in a foreign country without any local support. As motivation Gabriel points to a heavenly crown, the stephanos victory crown of Revelation 2:10, “be thou faithful unto death and I will give thee a crown of life.” The souls we have a part in saving will be to our credit, not of meritorious salvation, but of “good works which He has prepared in advance for us” (Ephesians 2:10). The jewels adorning this crown sparkle as an eternal testimony to our faithfulness in evangelism.

The original words of the chorus are interestingly different from what we sing today. The singer is pictured as one who takes responsibility to spread the Gospel willingly. He answers the call with a resounding, “Here am I – send me!” (Isaiah 6). If he is the giver, then this brings to mind “God loves a cheerful giver” (II Corinthians 9:7). Two components of cooperation are mentioned: the heart and the hand. Often one’s heart is willing (that is, he agrees it’s a worthy idea), but he won’t lift a finger to assist. Similarly one can be a busy Christian with a misguided heart, cruising a course of unfulfillment and disappointment. We must be balanced workers to be of lasting impact in God’s kingdom. The glory, however, goes not to mankind for his cunning evangelistic schemes or church growth paradigms, but to God “who gives the increase” (I Corinthians 3:7). “We are unworthy servants; we have only done what was our duty” (Luke 17:10).

From our shore to yours, let the light shine! Let the radiant beams of the Gospel light the world forever more!

Not only would one call this a typical gospel song, it is one which gave definition to the genre. The harmony is classic: predictable, yet enjoyable. The echoy voice parts are kept well within the singable ranges of the voices for which they were intended. The only part that doesn’t have a spotlight moment is that of the tenors. For the most part, the tenors only sing three notes through the whole song.

The most noticeable difference in this original arrangement of Send the Light is – obviously – the bass lead in the first chorus. However, do note that the second chorus is also different. In the last measure of the first line of the second chorus (“from shore to shore”), the soprano melody we’re used to hearing is Db-C-Bb-C (Fa-Mi-Re-Mi), but here it is Db-C-Bb-Ab (Fa-Mi-Re-Do).

I have no official story as to why the song was redacted to only one chorus, but the original chorus is growing on me. Do you know of other songs which were this significantly edited from their original versions?

2 thoughts on “Send the Light”

This site uses Akismet to reduce spam. Learn how your comment data is processed.